For The Limits Of … column, Rachel Grant unpicks the links between the oil industry and culture in Aberdeen, outlining the insidious effects it has had on the city’s art scene and asking where and how forms of fossil fuel divestment might take place. Kiah Endelman Music speaks to artist and filmmaker Michelle Williams Gamaker about the role language has played in her work. In The Sharp Wheel That Loves You, Georgia Horgan dissects the appearance of Japanese anime in Mexican culture since a series of international trade agreements beginning in the 1980s. In Kandace Siobhan Walker’s SEINE, a net ‘WEARS THE DEAD LIKE JEWELLERY’, and pulls in the stories of her childhood. In Top Floor Tales, Hayley Jane Dawson recounts a journey home from an exhibition opening in Glasgow, unearthing the layers of personal history woven into a well-trodden route through the Southside. Aya Bseiso’s Impossible Terrains meditates on the intimacy held in contested landscapes, the memories that course through the watery border between Palestine and Jordan, and asks ‘How to Return?’ In our Metacritical, Lisette May Monroe recounts a detour to a museum of chewing gum in Arizona, speculating on the universal need to ‘divert’ one’s time and the privilege of having that recognised as art. In her review of Agitated Air: Poems After Ibn Arabi, Nasim Luczaj notes how the movements of Yasmine Seale and Robin Moger’s retranslation perform love as a site of renegotiation and recapture. Rodrigo Vaiapraia reviews Holy Bodies by Clay AD in light of Raphael’s painting The Ecstasy of Saint Cecilia, considering the book’s queer interweaving of the spiritual and bodily. Maria Sledmere responds to Elvia Wilk’s recent book of essays, Death by Landscape, plotting the points where a first person ‘I’ transforms from a glyph to a stalk that wraps itself around essays on the climate, fandom and the weird. In A Letter from Newcastle and Gateshead, Caitlin Merrett King recounts a weekend of openings and music in New Narrative style. Andy Grace Hayes reviews Scott Caruth and Alex Hetherington’s exhibition Seen and Not Seen at CCA, Glasgow, disentangling the ‘migrating sounds’ of the two artists’ work and asking if they are in conversation or competition. Hussein Mitha reviews Basel Abbas and Ruanne Abou-Rahme’s installation at The Common Guild ‘May amnesia never kiss us on the mouth’ reflecting on the show’s treatment of the 2011 Arab Revolutions in ‘strangely melancholic images, charged with unfulfilled potential and lost hopes’. Knotty relationships between class, time and creativity run through Kate Morgan’s review of Teddy Coste’s The Junction at Lunchtime and Gregor Horne’s New Work Scotland at Celine. In their review of Suds McKenna’s exhibition, A familiar plough into the knot of a tie, Romy Danielewicz describes the queer communality the works depict, a hedonistic imaginary of lives lived in a ‘mutability of presentation’. Reviewing Camara Taylor’s show at Collective, Maria Howard draws links between memory and water in the context of the artist’s research on Scotland’s links to the slave trade.

There are no reviews yet.

Be the first to review “Issue III” Cancel reply 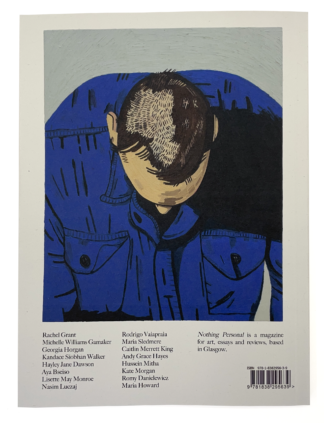